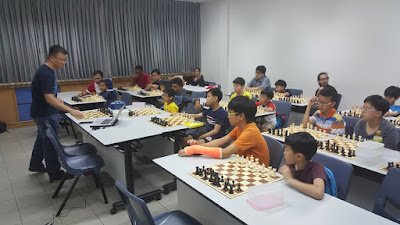 All present get to review the game Steinitz - Sellman which was a classic positional game expounding many of Steinitz's theories on the accumulation of small advantages as listed below:

5. Keeping our majority of queen side pawns to create remote passed pawn advantage in the end

6. Weakening of the pawns especially in front of the opponent's king

9. Play in the centre

11. Keep the Bishop Pair advantage with you and devoid your opponent from this
advantage if possible (exchange his one bishop with your knight)

12. Avoiding all such weaknesses in our camp (unless serious material loss is threatened) and create positional strengths

Steinitz has also expounded principles of conducting the game shown below, as listed in his writings in the Modern Chess Instructor:
1-At the beginning of the game, the forces stand in equilibrium.

2-Correct play on both sides maintains the equilibrium and leads to a drawn game.

3-Therefore, a player can only win as a result of an error made by the opponent (there is no such thing as a winning move).

4-As long as equilibrium is maintained, an attack, no matter how skillfully executed, cannot succeed against correct defense. Such a defense will necessitate the withdrawal and regrouping of the attacking pieces and the attacker will inevitably suffer disadvantage.

5-Therefore, a player should not attack until he already has an advantage, caused by the opponent’s error. That justifies the decision to attack.

6-At the beginning of the game a player should not seek to attack, instead a player should seek to disturb the equilibrium in his favor by inducing the opponent to make an error-a necessity before attacking.

7-When a sufficient advantage has been obtained, a player must attack tany weakness created or the advantage will be dissipated

Thanks to Bradley for having done a fantastic job in teaching the class these principles!