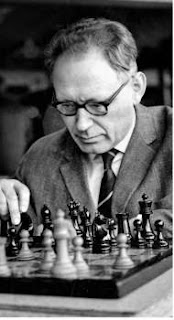 The 6th World Champion, Mikhail Moiseevich Botvinnik, lived through 2 World Wars and got to the Chess Olympus via a Candidates tournament staged in 1948 after the death of the 5th World Champion Alekhine in 1946. He won the tournament with 14/20. Ironically, he was the only World Champion never to have won a World Championship match, but was reinstated twice via rematches! He lost to Vasily Smyslov in 1957 and regained it the following year,  then to Tal in 1960 and regained it in 1961. As for the Bronstein match in 1951, he did not win the match but drew and kept his title.


Botvinnik was the pioneer in chess preparation which involved deep study of the opening all through to the endgame. He was a specialist in the lines he played and had good ideas that span right until the endgame. Strangely, Petrosian his conqueror adopted the same approach and won a game in their match via deep analysis of an opening line in the Grunfeld which gave White a lasting plus.

This approach to chess influenced his later pupils Kasparov and Karpov so their 3 matches in World Champion history became models of opening preparation.

Come on down Dec 30th to Thomson Chess Club with FT Bradley for the last lecture in 2016 and learn more about the achievements of the great Botvinnik! I am sure it will change the way you'd look at the game.
Posted by John Wong at 7:12 PM